What if You Could Grow Aquaponic Cannabis Farms at a Commercial Scale? 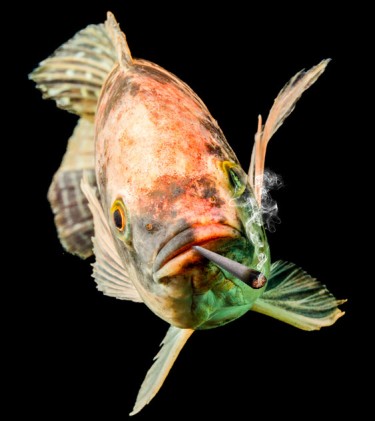 Aquaponic farming is nothing new – it’s been traced back to at least 1000 AD and was implemented by the Aztecs. In all likeliness, the practice is much older than that. If you’re not 100% sure about what aquaponics is – it’s essentially using a fish reservoir to utilize the waste product of the fish to feed your plants. A mini artificial ecosystem that maintains all components within the chain.

Which is probably why this hasn’t been adopted as the mainstream means of producing cannabis – the additional upfront costs. However, this isn’t to say that there aren’t commercial cannabis growers that aren’t using this ancient technology to compete with the market.

Thumb Genetics, a licensed marijuana grow operation located in Lansing, Michigan utilizes this technology and is perhaps one of a few of these types of cannabis grows. According to the owner, Lloyd Owens, “I can guarantee you’ve never been in a grow like this. This is the most insane grow you … have ever been in.” This makes me believe that his grow is unique – at least within the commercial sector.

This isn’t to say that aquaponics isn’t being used industrially. Typically, people utilize aquaponics with vegetables like lettuce, but to utilize cannabis as the main crop is something “fresh” within the aquaponics scene. Owens is right in asserting that in a “commercial grow” you’ve never seen anything like this, but I have seen this integration with home growers before. I’ve also seen someone integrate mushroom cultivation into the process – which is probably something I’m going to strive for in the coming years.

Thumb Genetics utilizes a 10,000 gallon system where the water is recycled continually removing the need for investing in expensive fertilizer or nutrient rich dirt. How much money can be saved using a system like this you ask?

“Basically, it’s about $80 worth of fish food per month, versus tens of thousands of dollars in chemicals each month,” said Lloyd Owens. “The other thing is: all these other grows, they waste all this water.” We’ve eliminated all the media, because our media is reusable, we’ve eliminated all the fertilizer, and the fact that we don’t have to transplant and that, we’ve minimized our employees … We’ve had the same water in those tanks for about a year and a half.” – SOURCE: Fairfield Citizen

In essence, the grow utilizes a closed system where the fish (blue Nile Tilapia), located in 4-foot tall blue tubs feed. When they digest and produce nutrient rich fecal matter, it leaches to a series of PVC tubes into different pools with bacteria and algae. It then moves to a 1,200-gallon water tank with red wiggler worms to continue to refine the H20. Once the water has gone though this process, it’s nutrient rich which then gets pumped to the grow room that houses hundreds of plants.

You heard that right – roughly $80 of feed per month to produce more than a hundred plants! Of course, the grow room utilizes artificial light – but what would happen if you used a green house where at most you’d have to control the heat and humidity? Well, you take that large light bill and reduce that significantly as well.

The additional side benefit of this system is that you’re producing food in the form of fish. Essentially, each fish has a life cycle of about two years before their digestive tracks stop becoming efficient for the system. They essentially evacuate less frequently and at higher volumes. This means that when the fish reach about 1-2 pounds in weight, they can be utilized as a food source.

“When we’re at full scale, we’re predicting about 20,000 meals a year we’ll be able to give away to the homeless,” Lloyd Owens said. “We’re not in the fish business. I’m not going to get a license to sell fish.”

While Owens might not be interested in the fishing business, this does create a unique symbiosis within industries that could – if managed correctly – be a very lucrative business model in the future. Can you imagine if two separate companies – a cannabis grower and a fishery – combine forces to maximize production of both “crops” while helping each other with operational costs? This seems like a stellar business model during times of recession, where both cannabis and food would increase in value.

Of course, there is a deterrent to this model of business which is complexity. Once you get everything under control – it’s not difficult to maintain. However, getting started can be a painful experience if you have never done it before. It takes time to understand the fish and how they interact, as well as finding the right balance in the ecosystem – but considering the sheer amount of savings you can make; the investment is certainly worth it.

If we’re talking about efficiency, reducing our impact on the environment, reducing costs of operations – Aquaponics and cannabis seem to be a match made in heaven. As I mentioned, personally I’ll be working on these systems in the near future as one of my personal missions in life is to be able to produce all of my food and medicine at home.

However, perhaps seeing this becoming the norm within the cannabis industry could mean more “ethical weed” for the future. 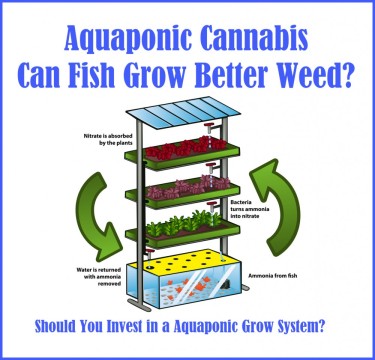 AQUAPONIC CANNABIS GROWING – DO THE FISH DO BETTER THAN US? 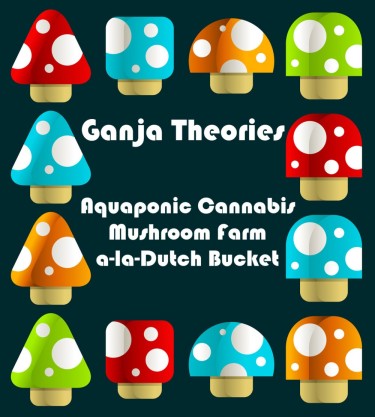 AQUAPONIC CANNABIS BASKETS, CAN IT BE DONE?