Do You Spend More on Cannabis or Starbuck’s Coffee? 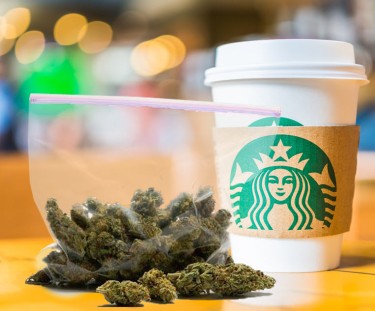 Talking about greens, the Mermaid has dropped from the pecking order and is no longer the most popular of greens across America. According to the latest study carried out by MJBiz, it was revealed that the sales of legal cannabis have surpassed those of Starbucks across America in 2021. In fact, by a significantly high margin.

MJBiz, a website dedicated to cannabis research and businesses studies the growth and expansion of the cannabis industry in America. Inclusive of their 2022 Factbook, the website compares the cannabis industry to huge revenue sectors like opioids, cigarettes, salty snacks, OTC medications, and coffee (starbucks).

The research by MJBiz also revealed that the legal cannabis industry didn’t just outperform Starbucks in terms of sales but also in overall growth. According to the report, the total annual revenue recorded by Starbuck in North America increased by 25% in 2021. This makes one wonder how much people are paying for Starbucks’ coffee and what their stance will be on the dangers of the unionizing efforts transpiring across the country. However, legal cannabis sales saw a growth of 30% in 2021.

MJBiz noted in the article that this encompasses the overall growth in only 39 states including the District of Columbia. These States have at least some form of legalized cannabis be it for recreational or medical use. Not included in the 39 States is Texas which has not legalized cannabis in any substantial capacity. Even Oklahoma has at least legalized the medical use of cannabis. It may seem Texas is conservative in its approach.

With the cannabis industry still at its early stage, it’s safe to reason that cannabis sales will continue to outpace that of Starbucks in the foreseeable future. The change in public perspective about marijuana use continues to be not positive for the herb. The huge untapped market in the cannabis industry is still waiting to be explored upon full legalization.

As it stands, the 11 cannabis NON-legalized states hold about 20% of the American population, and that’s a massive market waiting to be tapped into. A successful legalization attempt in these states will definitely serve as a boon for the overall industry. A growth Starbucks won’t just be able to keep up with.

Legal, Recreational Cannabis Sales Surges above $3.7B In 2021

The report revealed that legalized states generated over $3.5 billion in cannabis tax revenue from cannabis sales for recreational use in 2021 alone. This new height in cannabis tax revenue is recorded to be 34% more than the previous year (2020). Up till March 2022, legalized states have reported more than $11 billion in tax yield on cannabis sales from legalized recreational use. since 2014. This is the year sales began in Washington state and Colorado.

According to forecasts and predictions, global cannabis sales are said to surpass more than $35 billion in2022. This is said to be an increase of around 22% from the total sales of $29 billion in 2021. This forecast was made by BDSA banking in its latest rolling market update for the last five years.  BDSA also predicted that global marijuana sales will surge over $61 billion come 2026 with a compound yearly growth rate of over 16%.

After Marijuana Policy Project released the report,  Toi Hutchinson, the CEO and President of the organization gave a follow-up statement. He affirmed that the report gives further evidence that putting an end to marijuana prohibition provides remarkable financial wealth to state governments. He went on to say that the regulation and organization of cannabis for recreational use has produced tax revenues with billions of dollars at the state level.

Asides from the financial benefits, legal sales of cannabis have also established thousands of jobs across the nation. Thanks to these legal cannabis sales, vital programs and services are also able to receive the funding they need. Hutchinson also pointed out that while legalized states continue to do exploits, the states lagging behind waste limited government resources. He claimed these resources rather than use them to promote cannabis legalization as used to enforce archaic marijuana laws. And these laws do more harm than good to citizens of the unlegalized states.

In states where sales of cannabis for adult use are legal, tax revenues earned are allocated for various social programs and services. These include funding early literacy, education, drug, and alcohol treatment, public libraries, veterans’ services, school constrictions, job training, conservation, and expenses related to conviction expungement. Above all, these revenues are also allocated and invested in communities that have been to a large extent affected by the war on drugs and cannabis.

As things stand, 18 states have legislation in place that governs, regulates, and taxes cannabis sales to adults above the age of 21 years. About 8 of these laws were enacted just last year and in 2022 but six of these states, sales of legal cannabis and tax collection have not kicked off. With the gospel of cannabis exploits spreading, more states are now gathering momentum to legalize cannabis for adult use in 2022. Some of these states include Missouri, Maryland, Rhode Island, South Dakota, and Ohio. Stay tuned!

COFFEE AND CANNABIS – WHY IT IS A MATCH MADE IN HEAVEN!