If you’re smoking cannabis today – odds are you’ve been told that it “SIGNIFICANTLY INCREASES THE ODDS OF PSYCHOSIS!”

This is bullshit of course, but that doesn’t mean that those who promote this narrative won’t do everything in their power to continue spreading falsehoods.

New research from King’s College in London have found that cannabis users with a genetic predisposition to schizophrenia are the ones that are really at risk.

The funny thing is – people with a predisposition to schizophrenia can induce psychosis by losing their job or having someone in their family suddenly die. In other words – any type of trauma could potentially be the trigger that sends them down the rabbit hole of Schizophrenia.

Taking a look at the study

The study utilized data from a biomedical database containing in-depth information about participants health and genomes. Researchers were specifically examining the relationship between genetics, cannabis use and psychotic experiences.

In order to understand the relationship between these three items (cannabis, schizophrenia and genetic), they took a look at the reports on patient use-frequency and if they had a psychotic experience.

These psychotic experiences were either auditory or visual hallucinations. Afterwards, the researchers scored each participant’s genetic risk for schizophrenia by analyzing DNA mutilations that are more common in the Schizophrenic patient population.

What researchers uncovered was that cannabis users in general were 50% more likely than nonusers to report psychotic experiences. However, 60% of these had the highest risk scores for schizophrenia and 40% had the lowest risk scores.

Nonetheless – it’s not very clear whether any of these had “no risk” for schizophrenia? Additionally, if autidory hallucinations and visual hallucinations are considered “psychotic episodes” – how much of those episodes were temporarily induced by cannabis – i.e The patient was high.

This is what the authors of the study had to say:

“This study, while limited in scope, is an important step forward in understanding how cannabis use and genetics may interact to influence psychosis risk,” says Dr. Shreejoy Tripathy, senior author of the study.

“The more we know about the connection between cannabis and psychosis, the more we can inform the public about the potential risks of using this substance. This research offers a window into a future where genetics can help empower individuals to make more informed decisions about drug use.” – Source

So what does this all mean in plain English?

Firstly, the initial claim that “cannabis causes psychosis” is showing us that it’s inherently false. Those with a predisposition to schizophrenia have a higher prevalence than those who do not. This isn’t something that should shock people – it’s been the norm.

However, what we can see is that these research papers should be barred from making definitive claims before “further research” is completed.

Yet- when it comes to cannabis, lawmakers want to ensure that we abide by the rules that keep schizophrenics safe. I don’t see the same type of scrutiny on other legal substances like alcohol or tobacco or even food for that matter.

Under the logic of our current cannabis laws – in where we “need more research” for absolutely everything – we should be applying the same level of scrutiny for every consumable.

PEANUT ALLERGY IS THE SECOND MOST COMMON FOOD ALLERGY IN CHILDREN AND IS ON THE INCREASE. IT OCCURS IN ABOUT 1 IN 50 CHILDREN AND 1 IN 200 ADULTS.

In other words, peanut allergies have a higher prevalence than schizophrenia. And even within the percentile of potential schizophrenics – there is no “guarantee” that psychosis will ever present itself. The genes could remain dormant for the entire life of the patient.

On the other hand, peanuts are everywhere! The odds of consuming a rogue peanut and sending a kid into anaphylactic shock is quite high.

Under the rhetoric of cannabis laws, we need to limit peanuts for everyone! If anyone is caught selling peanuts, we should jail them and seize their properties!

We should run campaigns educating people on the dangers of peanuts and how a small portion of the population “could potentially” be negatively affected by its prevalence!

If this is starting to sound a little “bogus” for you – just switch the word peanuts for cannabis and you’re talking about the exact same thing. Of course, peanuts cannot get you high – but they might kill you!

Why catering to the most “at risk” is asinine!

We are seeing a movement within lawmakers attempting to regulate cannabis for the “weakest among us”. That’s not really the responsibility of the government.

We do not give the government the authority to regulate our diets even though heart disease is the #1 killer in the US and is directly linked to poor diet.

We do not ban cars because “some drivers may get intoxicated”. We do not ban all peanuts because some kids are in danger of dying if they are consumed.

Yet, we have no problem to give the government control over a plant like cannabis, or the coca plant, or mushrooms, or opium.

For some reason, when something can make you “high” it is immediately dangerous. The question is, to who does it pose a danger?

I personally believe that the danger that we the government fears from these mind altering substances is not that of health, but that of narrative. People who tend to consume cannabis or psychedelics quickly discover how much bullshit is in the official narrative.

Perhaps these “mind-altering” substances and subsequent “scare studies” are meant to keep most people from discovering the truth – the government’s story is full of plot holes!

That’s the main reasoning behind these psychosis scares if you ask me. 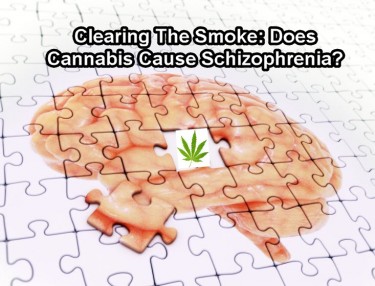 DOES SMOKING WEED CAUSE SCHIZOPHRENIA IN SOME PEOPLE?