Popular
【ドイツパン紹介と動じない精神】叫び声をよく聞くドイツ暮らし｜酸っぱいドイツパン４種類とプレッツェル｜カルテスエッセン？夜に冷たい食事？！｜CBDオイルで老化防止｜オシャレとは程遠い実際の海外生活…
State of Legal Cannabis Webinar
New York Has a Crime Problem
Ancestry D.N.A. How they Tether to your culture...
What can cities do for cannabis equity? Seattle...
New Jersey Workplace Cannabis Guidelines Leave Employers Baffled
Norm MacDonald-Stereotype Jokes Compilation
American Reacts To | What is the Dumbest...
Sunscreen on the Go to protect your Ink...
Study: You’re More Likely To Have Stress In...
Uncategorized

Can You ‘The Secret’ Weed Into Your Life? 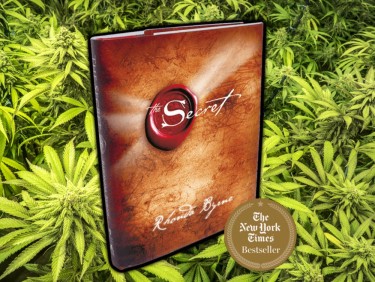 We’ve all been there – when we’re dry and with no means of getting weed anytime soon maybe due to access or money to buy it.

What if there was a way where you could attract weed without you having to ‘do’ anything to get it. I’m talking about “manifesting weed of course”.

Now – I personally try to steer clear of terms such as “manifesting” and prefer terms like “Non-Linear Engagement” in where the unconscious mind utilizes non-linear actions to “conjure cannabis” seemingly out of thin air.

This is sometimes also called “The Law of Attraction” and there are millions of people who swear that it works.

The question is – “Can you The Secret Weed?”

How Non-Linear Engagement Works [in a nutshell]

There’s so many different possible answers to the concept of The Law of Attraction [LOA] that depending on my degree of bullshit – could sound either very scientific or spiritual or even a weird hybrid mix between the two.

Personally – I believe that there is some unexplained science behind the phenomenon known as “manifesting”. It probably has something to do with the unconscious mind, thought fields having some sort of energetic signature and creating resonance energy with other thought-fields – but once again…it may be too wooey for some.

So what is it all about?

We typically solve our problems in a “linear fashion”. This is done within the rational mind where 1+2= 3. This mode of operation is fine when you’re dealing with linear problems.

However, it becomes far more complex when you engage with a non-linear reality. Things don’t always go your way and it’s not because you’re a bad planner – it’s because there are a trillion other things happening at the same time.

The mere fact that your ability to perceive this chaos is limited doesn’t exclude the effect it has on our lives. More importantly, many people go through life completely unaware about this reality and when negative things happen – they don’t understand why.

Typically, during these times people reach out to a deity for assistance.

That is ‘non-linear engagement’ by personifying the creative unconscious as the desired deity. Whether you believe in these spiritual beings or not – the effects are real to those who do believe in them.

This means that when the unconscious mind has an avenue to explore non-linear problem solving, it does have the ability to produce concrete results.

Of course – this goes against the rigid structure of the rationalist-linear thinkers, which is why it isn’t explored on a larger platform such as universities.

Can this be applied to weed?

I have written about WeedsCraft – specifically about making a sigil joint– this is a perfect example of utilizing non-linear engagement.

As with anything in life, cannabis can also be attracted. It actually happened to me on several occasions.

I once spent about six months in California. I was doing some backpacking in that area and there were times when we simply didn’t have enough cash to spend on weed. Especially on a musician’s income.

I fondly remember two moments where people came from the street after I simply invoked it – and handed me weed. One person even said, “God told me to give this to you…”

I mean, my unconscious mind projected its will so that another person could pick it up, interpret it into their own system of belief and take action accordingly.

I wasn’t in the presence of the person when I said it, but the way I like to see it is like you’re activating a beacon. This beacon then will find a similar resonating energy signature and then bring the solution closer through this “psychic network” of sorts.

Once again – it’s easy to get “wooey” with this stuff.

Nonetheless – this has happened to me not only with cannabis, but also with other substances like a dude giving me a bag of peyote in the middle of a city street – once again because “god instructed him to”.

How to Train your Non-Linear Engagement?

When it comes to this stuff, you need to first become aware of the fact that you are a co-creator of your life. Everything in your life is there in part because you wanted it to be there.

To train your awareness, you can start by doing activities such as Meditation, Breathwork, yoga, Tai Chi, etc. This is the first step to teach you awareness.

The second important rule is that you need to do it from a place of “Gratitude”. You need to be able to believe that whatever it is you do – whether through a prayer or a sigil joint – your unconscious mind has the ability to engage with reality in a non-linear way to address your request.

Finally, you need to be able to vividly envision your intent coming true.

Then, simply be patient and continue about your life. Your petition may not come in the way you expect – so pay attention on seeing how your intention will manifest without having a lust for the result.

Sounds easy on paper – try it for yourself!

THE LAWS OF ATTRACTION AND CANNABIS, READ MORE… 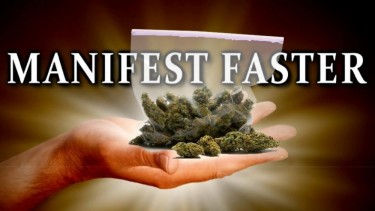 MANIFEST WEED INTO YOUR LIFE BY THINKING ABOUT IT, READ THIS!